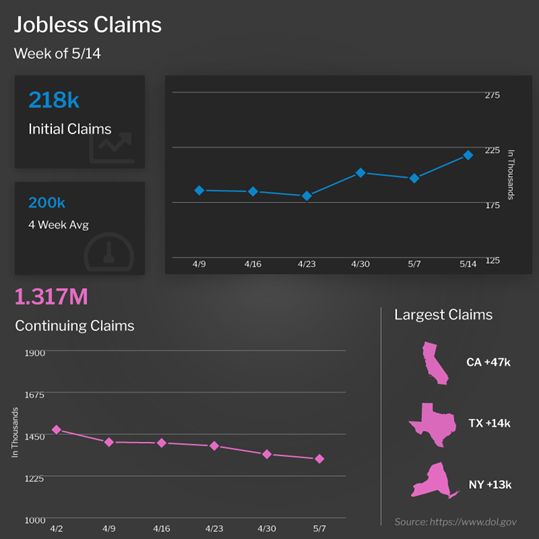 Sales of existing homes and construction of single-family homes eased in April, while Fed Chair Jerome Powell’s comments caused volatility in the markets. Here are the most crucial headlines:

Existing Home Sales, which measure closings on existing homes, showed that sales were down 2.4% in April at a 5.61 million unit annualized pace. This data likely reflects people shopping for homes in February and March, which included much of the rise in rates we’ve seen – but not all of it. On a year over year basis, sales were only down 5.9%, which is still quite strong considering higher rates, higher home prices and tight inventory.

What’s the bottom line? There were 1.03 million homes available for sale at the end of April, up 10.8% from March. However, this equates to just a 2.2 months’ supply of homes. Six months is considered a balanced market, so this data speaks to the ongoing imbalance of supply and demand, which should continue to be supportive of home prices.

Speaking of prices, the median home price was reported at $391,200, which is up almost 15% year over year. Remember that the median home price is not the same as appreciation. It simply means half the homes sold were above that price and half were below it. This figure continues to be skewed by the mix of sales, as sales on the lower end were down sharply on an annual basis, while sales of homes above $500,000 were much higher.

The National Association of Home Builders Housing Market Index, which is a real-time read on builder confidence, fell 8 points to 69 in May, coming in much worse than expectations. Looking at the components of the index, current sales conditions fell 8 points to 78, future sales expectations were down 10 points to 63 and buyer traffic declined 9 points to 52.

What’s the bottom line? Any reading above 50 on this index, which runs from 0 to 100, signals expansion while readings below 50 signal contraction. While these numbers aren’t necessarily bad, the drops are significant. Builder sentiment is weakening, as their material costs are still up 19% from last year, home prices and interest rates are higher, and labor issues and a backlog of homes to build remain.

Housing Starts, which measure the start of construction on homes, fell 0.2% from March to April. But starts for single-family homes, which are the most important because they are in such high demand among buyers, plunged 7.3%. Building Permits, which are a good forward-looking indicator for Housing Starts, were down 3.2% while single-family permits also fell by a larger amount, dropping 4.6%.

What’s the bottom line? Despite the monthly declines, overall Housing Starts and Building Permits were higher compared to April of last year. However, as noted above, one of the biggest issues is that builders are still facing challenges in completing homes. Single-family units completed were down 5.1% from March to April, showing that the backlog continues to grow for builders.

What the Media Gets Wrong About Housing Inventory

Recently, there has been media speculation that household formations are lagging and that we could have an oversupply of inventory. Let’s break down some numbers to determine what’s really going on.

There were 1.4 million households formed in March (on an annualized pace), which is historically a pretty strong level and above the average. At the same time, looking at last week’s Housing Starts report for April, there were 1.7 million total starts. This includes both single-family and multi-family places to buy or rent.

But remember that each year about 100,000 homes are destroyed due to aging or replacements. This means that on net, we are seeing around 1.6 million homes created. Subtracting out the 1.4 million household formations, that is only approximately 200,000 units that are going towards the undersupply we are seeing in housing.

What’s the bottom line? If Freddie Mac is correct in their thinking that we are undersupplied by 3.8 million homes to meet demand, it would take over 19 years to just reach equilibrium – not even overbought territory. Even if we lower their estimate and are only undersupplied by 1 million homes, it would still take 5 years at the current pace to reach equilibrium. Despite the media’s best efforts to create fear, the numbers don’t support signs of overbuilding or an oversupply.

Is the Rise in Initial Jobless Claims a Trend?

The number of people filing for unemployment benefits for the first time rose by 21,000 in the latest week, as there were 218,000 Initial Jobless Claims reported. Continuing Claims, which measure people who continue to receive benefits after their initial claim is filed, fell by 25,000 to 1.317 million. This is the lowest number of Continuing Claims since December 1969.

What’s the bottom line? While the latest week’s data is still a very low level of initial claims, they have been increasing over the past few weeks and the four-week moving average is at its highest level since February. Should this trend continue, it could be an early sign that unemployment will begin to rise, which is another recession indicator.

Last Tuesday, there was a ton of volatility in the markets following Jerome Powell’s comments about the economy. Powell said that the Fed will continue to hike their benchmark Fed Funds Rate until they kill inflation. Note that the Fed Funds Rate is the interest rate for overnight borrowing for banks and it is not the same as mortgage rates. In fact, hiking the Fed Funds Rate can be a good thing for mortgage rates, as the Fed curbs inflation and preserves the fixed return a longer data Bond provides.

What’s the bottom line? However, the Fed has already started to backtrack. Originally, Powell indicated that there was a good chance to achieve a “soft landing,” meaning the Fed can slowdown or tighten the economy in their attempt to bring inflation under control while avoiding a recession. But now, he is saying there may be some potential paths to avoid a recession. Many are questioning if the Fed will have the fortitude to continue tightening to reduce inflation, or if they will be forced to reverse course and start being accommodative once again based on market conditions.

If the upcoming holiday weekend has you dreaming of a road trip this summer, these Chocolate Cherry Granola Bars courtesy of Martha Stewart make for a great snack to bring along for the ride.

Press firmly into a 9-by-13-inch baking pan lined with parchment paper. Bake until golden and firm, approximately 35 to 40 minutes. Once cooled completely, remove from pan and cut into squares.

Store in an airtight container at room temperature for up to three days.

On Wednesday, the minutes from the Fed’s May 3-4 meeting will be released and these always have the potential to move the markets.

Thursday brings the latest Jobless Claims figures along with the second reading on first quarter GDP.

Ending the week on Friday, crucial inflation data for April will be reported via the Fed’s favored measure, Personal Consumption Expenditures.