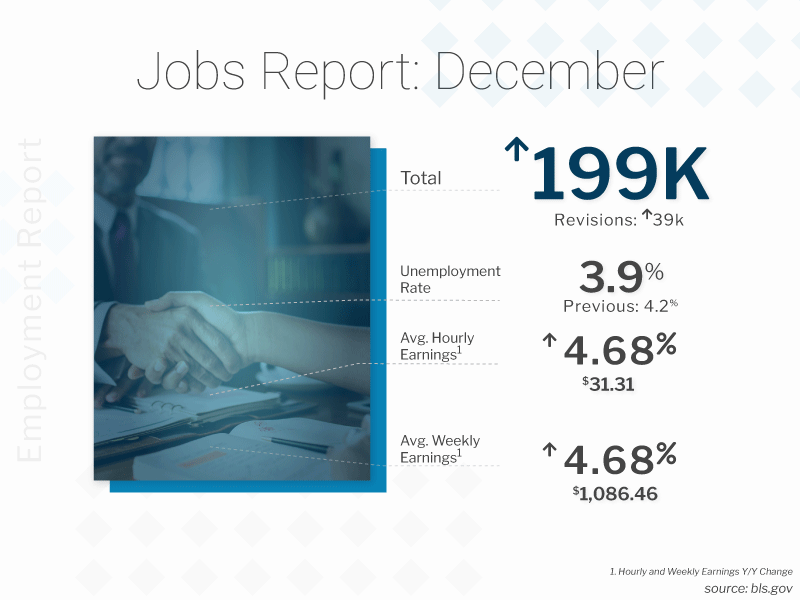 There was good news when it came to job growth in December – despite the disappointing headline figure from the Bureau of Labor Statistics. Home prices also continued to appreciate in November, but it was the minutes from the Fed’s December meeting that really added some fireworks to the markets last week.

The Bureau of Labor Statistics (BLS) reported that there were only 199,000 jobs created in December, which was half the job gains that were expected. However, there were positive revisions to the figures for October and November adding 141,000 new jobs in those months combined, which makes up for some of the miss on the headline figure. Yet this headline figure is far from the whole story when it comes to job growth in December, as explained below.

Private sector payrolls nearly doubled expectations in December, with the ADP Employment Report showing that there were 807,000 jobs created. Job gains were reported across all sizes of businesses. Both goods-producing and service-providing sector companies showed gains, with services contributing the majority share at 669,000 jobs.

On another positive sign, Jobless Claims remain near pre-pandemic levels with the number of first-time filers hovering near 52-year lows. There are now 1.722 million people in total receiving benefits, which is a healthy number and in stark contrast to the 20 million plus seen last year.

In housing news, CoreLogic’s Home Price Index report for November showed that home prices rose by 1.3% from October and 18.1% year over year. Detached homes appreciated at an even higher pace of 19.4% year over year. The ongoing dynamic of strong demand for homes and tight inventory remains supportive of home prices.

Meanwhile, Apartment List’s National Rent Report for December showed that rents were up almost 18% year over year, which is a record. However, the national index did fall by 0.2% in December, marking the only time rents declined month over month last year.

But perhaps the biggest news of last week came on Wednesday when the minutes from the Fed’s December meeting were released. Don’t miss the important details below.

More to the Jobs Report Than Meets the Eye

The Bureau of Labor Statistics (BLS) reported that there were only 199,000 jobs created in December, which was half the job gains that were expected. However, there were positive revisions to the figures for October and November adding 141,000 new jobs in those months combined, which makes up for some of the miss on the headline figure.

Yet this was a tale of two reports, as there are two surveys within the Jobs Report and there is a fundamental difference between them. The Business Survey is where the headline job number comes from and it’s based predominately on modeling.

The Household Survey, where the Unemployment Rate comes from, is done by actual phone calls to 60,000 homes. The Household Survey also has a job loss or creation component, and it showed there were 651,000 job creations, while the labor force increased by almost 168,000. The number of unemployed people decreased by 483,000, causing the Unemployment Rate to fall from 4.2% to 3.9%.

Why was there a big disconnect between the two reports?

The Household Survey includes self-employed workers whose businesses are unincorporated, unpaid family workers, agricultural workers and private household workers who are excluded by the Business Survey. And with the big surge we’ve seen in self-employment, this could account for some of the disconnect.

Average hourly and weekly earnings were both up roughly 4.7% year over year. Wage growth is running even hotter if you annualized the pace over the last six months at 6%. You have to look back to the 1990s to see wages growing at 6% year over year, which shows how tight the labor market is.

The ADP Employment Report, which measures private sector payrolls, showed that there were 807,000 jobs created in December – almost double what economists had forecasted. While November’s figures were revised lower from 534,000 to 505,000 new jobs in that month, this was certainly a solid report.

Both goods-producing and service-providing sector companies showed gains, with services contributing the majority share at 669,000 jobs. Leisure and hospitality had the biggest gains with 246,000 jobs, followed by trade, transportation, and utilities at 138,000, and professional and business at 130,000. On the goods-producing side, construction also showed strong gains at 62,000.

ADP’s Chief Economist, Nela Richardson, noted, “December’s job market strengthened as the fallout from the Delta variant faded and Omicron’s impact had yet to be seen.”

We will see if this means we will have a lower job growth figure for January when that data is released on February 2.

The bottom line is that of the 19.6 million private sector jobs lost in March and April 2020, we’ve since recovered about 15.6 million of them.Initial Jobless Claims Remain Near 52-Year Low

The number of people filing for unemployment benefits for the first time ticked higher by 7,000 in the latest week, as Initial Jobless Claims were reported at 207,000. Note that this is still a low level of claims and not far off 52-year lows. Remember that since this reading shows the pace of firings and people filing for benefits, the lower the number the better.

Continuing Claims, which measures individuals who continue to receive benefits, rose 36,000 to 1.754 million, just off the previous week’s pandemic-era low.

There are now 1.722 million people in total receiving benefits, which is a healthy number and in stark contrast to the 20 million plus seen last year. It also reflects that the labor market remains tight. Employers are having a hard time finding new workers and are reducing their pace of firings.

The Fed released the minutes from their December 15 meeting, which showed that they discussed reducing their balance sheet and that they are serious about removing accommodation more aggressively.

The Fed also discussed hiking their benchmark Fed Funds Rate faster and the market estimate is now showing a 76% chance of the first hike in March. Note that the Fed Funds Rate is the interest rate for overnight borrowing for banks and it is not the same as mortgage rates.

So, what does this mean?

Remember that back in 2020 during the heart of the pandemic, the Fed began buying $40 billion in Mortgage-Backed Securities (MBS) and $80 billion in Treasuries each month to inject liquidity into the markets and keep long-term rates lower. These ongoing purchases were meant to stabilize the markets and aid in our recovery.

As our recovery proceeded, the Fed came under pressure last year to start tapering, or reducing, these purchases. In their meeting last November, the Fed initially announced that they would begin tapering their purchases of MBS and Treasuries by $15 billion per month. However, in December the Fed decided to accelerate the reduction of their purchases of MBS and Treasuries from $15 billion per month to $30 billion.

But what was unclear was how the Fed would handle their $8.8 trillion balance sheet, of which MBS and Treasuries make up roughly $8.3 trillion. The Fed receives money from the Bonds that they hold each month, which they have been reinvesting back into MBS. This has totaled roughly $70 billion per month, which has prevented their balance sheet from running off or reducing over time.

In the minutes from December’s meeting, almost all participants said they want to reduce their balance sheet shortly after the Fed Funds Rate hike, which likely means sometime between April and June. They also discussed letting MBS run off faster than Treasuries. The last time the Fed went through a tightening cycle, they waited two years to reduce their balance sheet, which is something they addressed and said they don’t want to do this time around.

What are the Fed’s options?

They could sell MBS and Treasuries, stop reinvestments altogether, or allow some fixed amount to fall off each month. With their intention to not spook the markets too much, they will likely choose the latter. Their comments showed many supported having monthly caps on the reduction, which is what we would expect.

The Fed addressing their balance sheet is what really impacted the equity and Bond markets last week. The timing of when the Fed hikes its benchmark Fed Funds Rate and when it reduces its balance sheet will certainly impact both Mortgage Bonds and mortgage rates this year – and will be something to closely monitor in the months ahead.

CoreLogic released their Home Price Index report for November, showing that home prices rose by 1.3% from October and 18.1% year over year. Detached homes appreciated at an even higher pace of 19.4% year over year.

CoreLogic forecasts that home prices will remain flat in December and appreciate 2.8% in the year going forward. Yet, they remain conservative in their forecasting and continue to miss on the low side. For example, CoreLogic had forecasted prices for November would rise by 0.2% from October and they actually increased by 1.3%.

Even though CoreLogic only forecasts a 2.8% gain in home prices over the next year, they are certainly the outlier compared to other forecasts. Goldman Sachs expects 16% gains, Zillow anticipates 14%, and Fannie Mae sees prices rising by roughly 7.5%. Mid to high single digit appreciation is definitely attainable and is still very meaningful for wealth creation. For example, a $400,000 home that appreciated by 8% would result in $32,000 in appreciation gain in just one year.

And of note, Apartment List released its National Rent Report for December, which showed that rents were up a record almost 18% year over year. To put this in context, annual rent growth averaged just 2.3% in the pre-pandemic years from 2017-2019. However, the national index did fall by 0.2% in December, marking the only time rents declined month over month last year. While December’s monthly reading could include some seasonality, it will be important to see if there are any more signs of slower pricing pressures.

This one-pot Chicken and Tomato recipe courtesy of Jamie Oliver is a quick, easy and delicious mid-week meal.

Preheat oven to 350 degrees Fahrenheit. Season 4 chicken legs with sea salt and ground black pepper and add them into a snug-fitting pan in one layer.

Remove leaves from a large bunch of basil, finely chop the stalks, then add the basil leaves and stalks to the pan. Cut two big handfuls of red and yellow cherry tomatoes in half and add to pan. Quarter one big handful of plum tomatoes and add to pan.

Break one garlic bulb into cloves and add to pan along with 1 fresh red chili (finely chopped). Drizzle some olive oil and stir ingredients, pushing the tomatoes underneath.

Bake for 1 1/2 hours, turning the tomatoes halfway through, until the chicken skin is crisp and the meat falls off the bone.

Enjoy with a green salad and save any leftovers for lunch or dinner the next day.

The week kicks off on Tuesday with an update on how small businesses are feeling when the National Federation of Independent Business Small Business Optimism Index for December is reported.

Then, all eyes will be on two critical inflation reports when December’s Consumer Price Index is released on Wednesday, followed by the Producer Price Index on Thursday.

The latest Jobless Claims figures will also be reported on Thursday, while December’s Retail Sales will be delivered on Friday.

Mortgage Bonds have broken beneath support at 100.90, which is a negative sign. They are trading in an extremely wide range with 100.90 acting as a ceiling and 99.80 acting as our next floor of support.