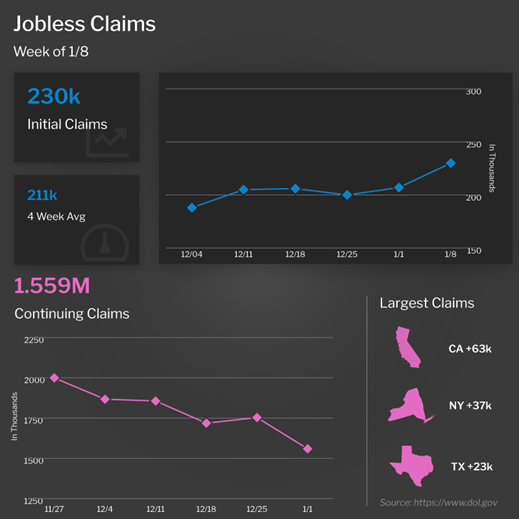 Inflation continues to set record highs and Fed Chair Jerome Powell made some notable remarks regarding the Fed’s stance on inflation. Plus, Jobless Claims hover at pre-pandemic levels as the labor market remains tight.

The Consumer Price Index (CPI) showed that consumer inflation rose by 0.5% in December while the year over year reading ticked higher from 6.8% to 7%! Core CPI, which strips out volatile food and energy prices, also rose on a monthly and annual basis.

Wholesale inflation increased in December as well, with the Producer Price Index (PPI) rising 0.2% from November. On a year over year basis, the index increased from 9.6% to 9.7%, which is a record high since the methodology for collecting this data was changed in 2010. Core PPI, which again strips out volatile food and energy prices, rose 0.5% in December, while the year over year figure rose from 7.7% to 8.3%, which is also a record.

The National Federation of Independent Business released important data that speaks to how inflation is impacting small businesses, while inflation may have also played a part in December’s weak Retail Sales figures, both of which are highlighted below.

Jerome Powell testified in front of Congress last week at his hearing for nomination to a second term as Fed Chair. Of particular note regarding inflation, he said, “We will use our tools to support the economy and a strong labor market and to prevent higher inflation from becoming entrenched.”

Rising inflation is critical to monitor because it can have a big impact on Mortgage Bonds and home loan rates, which are tied to them. Read more about this below.

In other news, Jobless Claims continue to hover near pre-pandemic levels. There are now just under 1.95 million people in total receiving benefits, which is a healthy number and in stark contrast to the 19 million plus seen in the comparable week last year. Finding labor remains one of the biggest challenges for employers, so they continue to hold onto their workers and reduce the pace of firings, which reflects the current tight labor market.

The Consumer Price Index (CPI), which measures inflation on the consumer level, rose by 0.5% in December. This was in line with expectations and nudged the year over year reading higher from 6.8% to 7%.

Core CPI, which strips out volatile food and energy prices, rose by 0.6%, which was a bit hotter than expectations. As a result, year over year Core CPI jumped from 4.9% to 5.5%.

Within the report, rents rose 0.4% in December and increased from 3% to 3.3% on a year over year basis. While this data has started to increase, the CPI report is still not capturing the double digit increases year over year that many other rent reports are showing.

Owners’ equivalent rent increased 0.4% and the year over year figure rose from 3.5% to 3.8%. However, note that this data is based on a survey that asks homeowners, “If someone were to rent your home today, how much do you think it would rent for monthly, unfurnished and without utilities?” Understandably, this is very subjective and many people would be guessing how much their home would rent for.

Remember, inflation is the arch enemy of fixed investments like Mortgage Bonds because it erodes the buying power of a Bond’s fixed rate of return. If inflation is rising, investors demand a rate of return to combat the faster pace of erosion due to inflation, causing interest rates to rise. This is why keeping an eye on inflation remains critical.

The Producer Price Index (PPI), which measures inflation on the wholesale level, rose 0.2% in December, though this was half of expectations. On a year over year basis, the index increased from 9.6% to 9.7%, which is a record high since the methodology for collecting data was changed in 2010.

Core PPI, which again strips out volatile food and energy prices, rose 0.5% in December, coming in line with what was forecasted. However, the year over year figure was hotter than expectations and rose from 7.7% to 8.3%, which is another record.

Producer inflation continues to rise, which often leads to hotter consumer inflation levels, as producers pass those higher costs along to consumers.

Also of note, the Fed’s Beige Book showed that every district reported wage pressured inflation, many as much as 10%. This is another factor that contributes to higher producer prices, as they have to pay employees more to retain them.

Additionally, Cass Freight expenditures, which measures the total amount spent on freight by companies, rose to a new record, up 44% year over year. This also contributes to higher prices and producer inflation.

While the December National Federation of Independent Business Small Business Optimism Index rose slightly, the internals on inflation and compensation were most important.

Positions not able to fill remained near record highs and as a result, the current compensation component rose to a fresh record at 48, compared to the average since 1984 at 22. Future compensation plans held at its record high. Employers are not able to find workers and are forced to pay their existing base and new talent more. This speaks to wage-pressured inflation.

Meanwhile, December’s Retail Sales were disappointing, especially given that December is usually a strong month for retail. Overall, sales were down 2% but Core sales, which strip out autos and gas, fell a sharp 3.1%. While some of this decline could be attributed to Omicron or people shopping early for the holidays due to supply chain issues, inflation may also be the main cause.

Since last March, the cost of goods has risen by 10.7%. If we don’t see a recovery in the upcoming reports as Omicron subsides, we will know that December’s decline in sales was due to inflation.

Fed Factors to Watch For

Jerome Powell testified at his re-nomination hearing that the Fed will “use our tools to support the economy and a strong labor market and to prevent higher inflation from becoming entrenched.”

The Fed has previously said that they would not shock the markets by hiking their benchmark Fed Funds Rate and tapering their ongoing purchases of Treasuries and Mortgage-Backed Securities (MBS) at the same time. These are purchases that began back in 2020 during the heart of the pandemic to stabilize the markets and aid in our recovery. As inflation heated up last year, the Fed came under pressure to start tapering, or reducing, these purchases, which they are currently on pace to complete in March. This means they may begin hiking the Fed Funds Rate at or before the next FOMC meeting, which is in May.

Another important factor to note is that the Fed holds about $9 trillion in Mortgage Bonds and Treasuries, which means that they receive principal payments from those holdings which would normally reduce the amount of their balance sheet over time. Some of those securities would naturally mature as well.

But the Fed has been taking these proceeds and reinvesting them back into Mortgage Bonds, which has prevented their balance sheet from getting smaller. These reinvestments amount to a massive additional $70 billion per month.

The bottom line is that timing of when the Fed starts to hike the Fed Funds Rate and how they handle the reduction of their balance sheet will be critical to monitor in the months ahead, as these actions will certainly impact inflation, Mortgage Bonds and interest rates.

Initial Jobless Claims moved higher in the latest week, as the number of people filing for unemployment benefits for the first time rose 23,000 to 230,000. Remember that since this reading shows the pace of firings and people filing for benefits, the lower the number the better. And despite the increase, this is still a low level of initial claims.

But the real story is Continuing Claims, which measure individuals who continue to receive benefits. They fell 194,000 to 1.56 million, meaning this data is now back at pre-pandemic levels.

There are now 1.95 million people in total receiving benefits, which is a healthy number and in stark contrast to the 19 million seen in the comparable week last year. While these numbers may still be influenced by the holidays, they do reflect that the labor market remains tight. Finding labor remains one of the biggest challenges for employers, so they continue to hold onto their workers and reduce the pace of firings.

These Cranberry Scones from our friends at Taste of Home are easy to make and perfect for a quick breakfast on the go or weekend brunch treat.

Beat 1 egg, then combine 3 tablespoons of milk and 2 tablespoons of beaten egg in a small bowl. Add to crumb mixture until just moistened. Stir in 1/4 cup dried cranberries.

Turn mixture onto a floured surface. Knead gently 6-8 times. Pat into a 6-inch circle and cut into 4 wedges.

Place scones onto prepared baking sheet, brush with remaining egg and sprinkle with 1/4 teaspoon coarse sugar. Bake for 12-15 minutes or until golden brown.

After the market closures Monday in honor of the Martin Luther King, Jr. holiday, housing reports will dominate headlines.

On Tuesday, we’ll get a read on how confident builders are feeling this month when the National Association of Home Builders releases its Housing Market Index. December Housing Starts and Building Permits will be reported on Wednesday, while Existing Home Sales data follows on Thursday.

We’ll also get an update on manufacturing for the New York region when the Empire State Index for January is released on Tuesday. The Philadelphia Fed Index follows on Thursday.

The latest Jobless Claims data will also be reported as usual on Thursday.

After breaking beneath support at 102.344 on Friday, Mortgage Bonds continued to slide lower and tested the next floor at 102.198. The 10-year bounced higher off 1.71%, broke above the next ceiling at 1.76%, and has more room to go until the next ceiling at 1.82%. We must remain on guard as there is still more room for yields to move higher, which could pressure Mortgage Bonds lower.