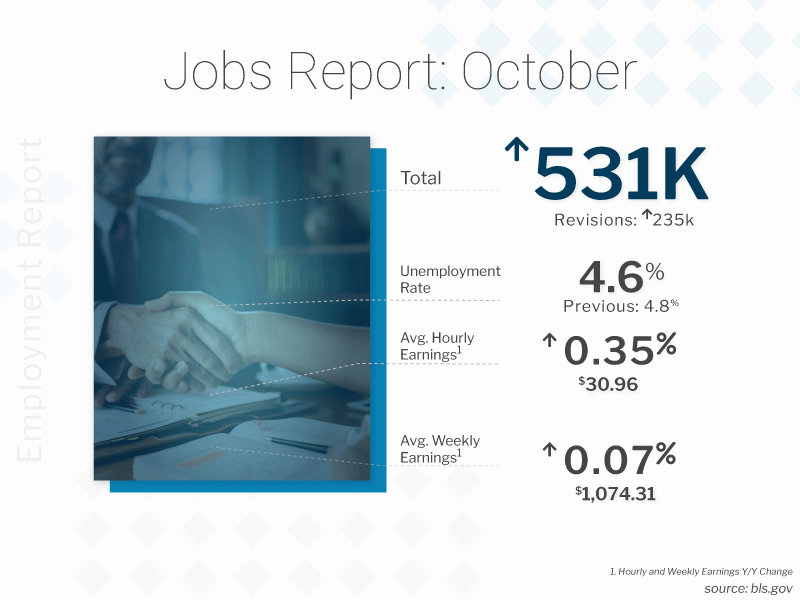 The first week of November was filled with headlines on job creations, home price appreciation and the Fed’s taper announcement.

Economists were anticipating 450,000 job creations in October, but job growth beat expectations last month per the Bureau of Labor Statistics, which reported 531,000 new jobs. There were also positive revisions to August and September adding 235,000 new jobs in those months combined, further strengthening this latest report. The Unemployment Rate declined from 4.8% to 4.6% and wages were on the rise. However, the labor force participation rate hit a 50-year low, which is likely not a surprise to many businesses who are struggling to hire workers this fall.

Private sector payrolls also came in stronger than expected in October, with the ADP Employment Report showing that there were 571,000 jobs created versus the 400,000 expected. This was a strong report even with September’s figures revised lower by 45,000 jobs. Both goods-producing and service-providing sector companies showed gains, with services contributing the majority share at 458,000 jobs. Job gains were also reported across all sizes of businesses.

Initial and Continuing Jobless Claims once again hit pandemic-era lows, as they were reported at 269,000 and 2.1 million respectively in the latest week. The number of people filing for unemployment is starting to resemble the levels we saw prior to the pandemic.

In housing news, CoreLogic’s Home Price Index report for September showed that home prices rose by 1.1% from August and 18% year over year, which is a 0.1% decrease from the 18.1% annual gain reported for August. Rental prices were also on the rise, with Apartment List’s November National Rent Report showing an 0.8% increase in rents. Rents are up 16.4% year to date while 35 of the nation’s 100 largest cities have seen rents jump by more than 20% since the start of the pandemic.

Last but certainly not least, the Fed announced that they will begin tapering their purchases of Mortgage Backed Securities and Treasuries, which have been ongoing to stabilize the markets. Don’t miss our important analysis below where we break down the numbers and explain what this really means.

The Bureau of Labor Statistics (BLS) reported that there were 531,000 jobs created in October, which was stronger than the 450,000 new jobs that were expected. In addition, there were positive revisions to the figures for August and September adding 235,000 new jobs in those months combined, further strengthening October’s report.

Note that there are two reports within the Jobs Report and there is a fundamental difference between them. The Business Survey is where the headline job number comes from and it’s based predominately on modeling.

The Household Survey, where the Unemployment Rate comes from, is done by actual phone calls to 60,000 homes. The Household Survey also has a job loss or creation component, and it showed there were 359,000 job creations, while the labor force increased by 104,000. The number of unemployed people decreased by 255,000, causing the Unemployment Rate to fall from 4.8% to 4.6%.

Yet, despite the decline in the Unemployment Rate, the labor force participation rate was only at 61.6%, which is a 50-year low. So, while the job gains we saw in October are certainly positive, the labor force only increased by a little over 100,000 people, leaving employers wondering where workers are now.

In addition, it’s important to note that there has been a lingering misclassification error where people were classified absent from work for other reasons and not marked as unemployed on temporary layoff when they should have been. When we factor this into the calculations, the Unemployment Rate should have been around 0.1% higher at 4.7%. There are also 6 million people who have not looked for work in the last four weeks who are also not counted in the labor force or counted as unemployed.

Wages were on the rise. Average hourly earnings and average weekly earnings were both up roughly 5% year over year. Wage growth is running even hotter if you annualized the pace over the last 6 months. Leisure and hospitality earnings are up almost 12% year over year, but it appears that’s still not enough to attract the workers that are needed there.

The ADP Employment Report, which measures private sector payrolls, showed that there were 571,000 jobs created in October, which was stronger than expectations of 400,000 new jobs. While September’s figures were revised lower by 45,000 to 523,000 new jobs in that month, this was still a strong report.

Both goods-producing and service-providing sector companies showed gains, with services contributing the majority share at 458,000 jobs. Leisure and hospitality led the way with 185,000 job gains, followed by professional and business at 88,000, and trade, transportation, and utilities at 78,000. On the goods-producing side, construction also showed strong gains at 54,000.

The number of people filing for unemployment benefits for the first time declined once again in the latest week, as Initial Jobless Claims were down 14,000 to 269,000. This is the lowest reading since before the pandemic.

Continuing Claims, which measures people continuing to receive benefits, fell 134,000 to 2.1 million, which is also a pandemic-era low.

The federal COVID plans, including the Pandemic Unemployment Assistance and Emergency Claims, fell by nearly 4,000 combined, while claims for Extended Benefits increased by 27,000.

There are now 2.67 million people in total receiving benefits, which is down 158,000 from the previous week. Even though many job openings remain, the jobless claims picture continues to make significant improvements, with the numbers starting to resemble the levels we saw prior to the pandemic.

The Fed held their regularly scheduled Federal Open Market Committee meeting and announced that they will begin tapering, or reducing, their purchases of Mortgage Backed Securities (also referred to as Mortgage Bonds or MBS) and Treasuries starting later this month. These purchases that began during the pandemic have been ongoing to help stabilize the markets and have helped keep home loan rates low.

While there is some fear that tapering may cause rates to rise, let’s analyze what all of this really means.

The Fed has been buying $120 billion each month, including $40 billion of Mortgage Bonds and $80 billion of Treasuries to inject liquidity into the markets and to keep long-term rates lower to promote borrowing and expansion. Last week, the Fed said that they would start reducing that amount by $15 billion in November and $15 billion in December. The breakdown is a $5 billion reduction in Mortgage Bonds and a $10 billion reduction in Treasuries.

The Fed also said they may change the amount they will be tapering these purchases  in future months – either higher or lower – depending on economic conditions. But let’s say the Fed continues to reduce their purchases by $15 billion per month. While they would be done with their outright purchases by June 2022, over that time they would have still bought an additional $500 billion in Mortgage Bonds and Treasuries through their reinvestments of their holdings.

So even with tapering their outright purchases, the Fed’s balance sheet will still increase from $8.5 trillion to $9 trillion, which is an astounding number. Additionally, the Fed said that they have not even discussed reducing their balance sheet and stopping their reinvestments.

The Fed holds Mortgage Bonds and Treasuries, which means that they receive principal payments from those holdings, which would normally reduce the amount of their balance sheet over time. Some of those securities would naturally mature as well. But the Fed has been taking these proceeds and reinvesting them back into Mortgage Bonds, which has prevented their balance sheet from getting smaller. These reinvestments amount to a massive additional $60 billion per month.

So even when they stop their outright purchases, which again would be by June if they continue to taper them at $15 billion per month, they are still going to remain quite accommodative until they start allowing their balance sheet to reduce over time.

However, rising inflation remains a concern. Regarding inflation, the Fed changed their language and said that inflation was elevated but “reflecting factors that are expected to be transitory. Supply and demand imbalances related to the pandemic and the reopening of the economy have contributed to sizable price increases in some sectors.”

This updated stance reflects there is a lot of uncertainty regarding inflation. Basically, the Fed is hoping that supply chain bottlenecks ease, which will cause inflation to move lower.

Remember, inflation is the arch enemy of fixed investments like Mortgage Bonds because rising inflation reduces a Bond’s fixed rate of return. In other words, inflation can cause Mortgage Bonds to worsen or lose value and the home loan rates tied to them to rise. This is why keeping an eye on inflation remains critical.

The Latest on Home and Rental Prices

CoreLogic released their Home Price Index report for September, showing that home prices rose by 1.1% from August and 18% year over year, which is a 0.1% decrease from the 18.1% annual gain reported for August.

The 18% annual figure for September is really a horizontal move from August’s 18.1%  and follows suit with recent appreciation data released by both Case-Shiller and the Federal Housing Finance Agency, which seem to reflect that we’ve reached the maximum year over year gains. Note this does not mean that home prices are going to decline. It simply means we may see slower month over month gains and that home prices may rise at a more modest pace.

CoreLogic forecasts that home prices will rise 0.1% in October and 1.9% in the year going forward (which is lower than their previous annual forecast of 2.2%). They remain conservative in their forecasting and continue to miss on the low side. For example, CoreLogic had forecasted prices for September would rise by 0.3% from August and they actually increased by 1.1%.

Rents are also on the rise, per Apartment List’s November National Rent Report which showed an 0.8% increase in rents. The report also showed that rents are up 16.4% year to date. In addition, 35 of the nation’s 100 largest cities have seen rents jump by more than 20% since the start of the pandemic.

Fall is the perfect time of year for making soup, especially this Butternut Squash Soup, courtesy of our friends at the Food Network.

Cut a 2- to 3-pound butternut squash into 1-inch chunks and set aside. In a large pot, melt 2 tablespoons unsalted butter. Chop one medium onion and add to pot, cooking until translucent (about 8 minutes).

Add squash and 6 cups of chicken or vegetable stock. Bring to a simmer and cook until squash is tender (about 15 to 20 minutes).

Using a slotted spoon, remove squash chunks, add to a blender and puree until smooth. Return blended squash to pot and season with nutmeg, salt and black pepper to taste.

Serve with your favorite crusty bread and enjoy.

Inflation news will be the big headliner this week, beginning with an update on wholesale inflation when the Producer Price Index for October is reported on Tuesday. October’s Consumer Price Index follows on Wednesday.

We’ll also get an update on how small businesses were feeling last month when the National Federation of Independent Business Small Business Optimism Index is released on Tuesday.

The latest Jobless Claims data will be reported on Wednesday instead of Thursday due to the Veterans Day holiday.

« 5 Most Common Mortgage Mistakes
What is Enough – A Conversation about Money that could Change your Life! »