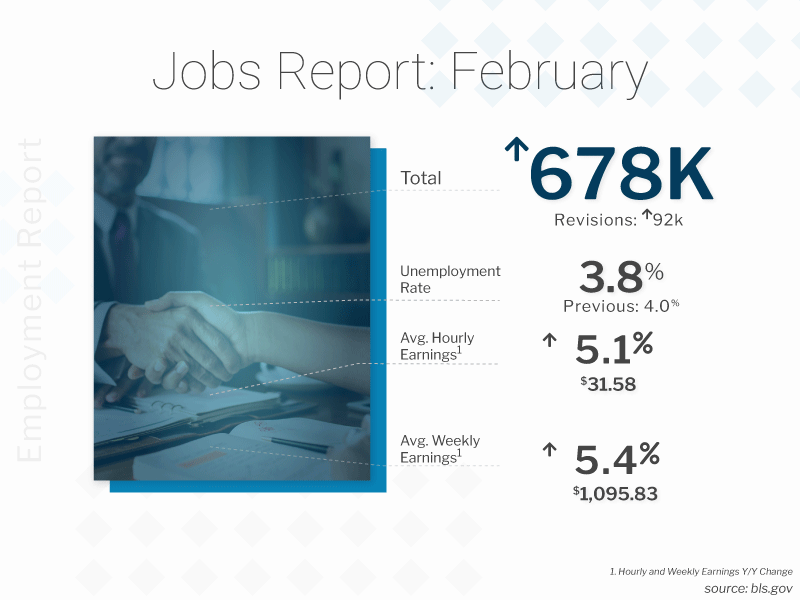 Job creations were strong in February, while comments from the Fed and ongoing fear and uncertainty surrounding Russia’s invasion of Ukraine contributed to added volatility in the markets.

Job growth beat expectations in February, per the Bureau of Labor Statistics (BLS), which reported 678,000 new jobs versus the 400,000 job creations that were anticipated. Positive revisions to the data for December and January, which added 92,000 new jobs in those months combined, made last week’s report even stronger. The Unemployment Rate decreased from 4.0% to 3.8%. However, one of the key takeaways is that average hourly and weekly earnings came in much lower than expectations.

Private sector payrolls also came in a bit stronger than expected in February, with the ADP Employment Report showing that there were 475,000 jobs created. Adding to the strength of the report were big revisions to January’s data, which was revised higher from 301,000 job losses to 509,000 job gains. Yet, the news was mixed across the various sizes of businesses, with small businesses losing 96,000 jobs, while large businesses gained 552,000 jobs.

Initial Jobless Claims fell by 18,000 in the latest week, as the number of people filing for benefits for the first time totaled 215,000. While Continuing Claims moved a notch higher by 2,000 to 1.476 million, this is just off the lowest level since 1970. There are now 1.971 million people in total receiving benefits, which is a stark contrast to the nearly 18.6 million people receiving benefits in the comparable week last year.

In housing news, CoreLogic’s Home Price Index report for January showed that home prices rose by 1.4% from December and 19.1% year over year. This annual reading is an acceleration from 18.5% in December and is the highest reading in the 45-year history of the index.

Rents were also on the rise, with Apartment List’s National Rent Report showing that rents were up 0.6% in February, which is a reacceleration after a few months of slowing increases. Year over year, rents were up 17.6%, almost matching the rise in home price appreciation. To put this in context, annual rent growth averaged just 2.3% in the pre-pandemic years from 2017-2019.

Also of note, the ISM Manufacturing Index, which measures the health of the manufacturing sector in the US, came in at 58.6 for the month of February. This was higher than last month’s reading of 57.6 and above expectations of 58.0.

The Fed also made headlines, as Fed Chair Jerome Powell delivered his Semiannual Monetary Policy Report to Congress, which caused quite a reaction in the Bond market on Wednesday. Don’t miss our important explanation about this below.

Lastly, volatility continued throughout global markets due to the uncertainty surrounding Russia’s ongoing invasion of Ukraine, especially toward the end of the week as there was news that Russia had captured a Ukrainian nuclear facility.

As can happen during times of geopolitical fear and uncertainty, we saw a flight to safety on Friday where Bonds can act as a safe haven for investors. This can cause riskier assets like Stocks to sell off, with that money flowing into the safer Bond market, causing Bond prices to move higher and their corresponding yields lower. Investors will be closely watching this dynamic in the weeks to come, as the world can only hope for a quick and peaceful resolution to this conflict.

The Bureau of Labor Statistics (BLS) reported that there were 678,000 jobs created in February, which was much more than expectations of 400,000. In addition, there were positive revisions to the data for December and January adding 92,000 new jobs in those months combined, making last week’s report even stronger.

Note that there are two reports within the Jobs Report and there is a fundamental difference between them. The Business Survey is where the headline job number comes from and it’s based predominately on modeling.

The ADP Employment Report, which measures private sector payrolls, showed that there were 475,000 job creations in February. This was a bit stronger than expectations of 400,000 job gains.

Adding to the strength of the report were big revisions to January’s data, which was revised higher from 301,000 job losses to 509,000 job gains. This marks a total revision of 810,000 jobs, and such a big revision does call into question the reliability of this report.

Both goods-producing and service-providing sector companies showed gains, with services contributing the majority share at 417,000 jobs. Leisure and hospitality had the biggest gains with 170,000 jobs, followed by trade, transportation, and utilities at 98,000, and professional and business at 72,000.

This dynamic is understandable, given that large businesses are better suited to compete with higher wages and benefit offerings. Small businesses are losing ground as they struggle to keep pace and, in turn, are less successful attracting talent from the limited pool of qualified workers.

Initial Jobless Claims fell by 18,000 in the latest week, as the number of people filing for benefits for the first time totaled 215,000.

Continuing Claims, which measure people who continue to receive benefits after their initial claim is filed, ticked a notch higher by 2,000 to 1.476 million. However, this is just off the lowest level since 1970.

CoreLogic released their Home Price Index report for January, showing that home prices rose by 1.4% from December and 19.1% year over year. This annual reading is an acceleration from 18.5% in December and is the highest reading in the 45-year history of the index.

CoreLogic forecasts that home prices will appreciate 0.2% in February and 3.8% in the year going forward. Yet, they remain conservative in their forecasting and continue to miss forecasts by a large margin.

Apartment List’s National Rental Report showed that rents were also on the rise, up 0.6% in February, which is a reacceleration after a few months of slowing increases. Year over year, rents were up 17.6%, almost matching the rise in home price appreciation. To put this in context, annual rent growth averaged just 2.3% in the pre-pandemic years from 2017-2019.

Remember that the Fed has two levers they can pull for tightening the economy – hiking their benchmark Fed Funds Rate and reducing their balance sheet. The Fed Funds Rate is the interest rate for overnight borrowing for banks and it is not the same as mortgage rates.

In his testimony, Powell gave support for a 25bp hike to the Fed Funds Rate instead of a 50bp hike. Why is this significant?

It suggests that the Fed is going to be less aggressive about addressing inflation, despite how rapidly it has risen and even in the face of oil prices now rising sharply as well. Powell also said the Fed will need to be “nimble” and “careful” because of the highly uncertain geopolitical backdrop.

These comments bring into question whether the Fed will have the resolve to continue to hike the Fed Funds Rate and tame inflation. As a result of the Fed appearing less aggressive, Stocks rallied while Bonds plummeted on Wednesday.

This Veggie Pasta Salad from our friends at The Food Network is quick and easy to make and perfect for a lunch on the go or a dinner side dish.

Bring a large pot of salted water to boil and cook 1 pound of any type corkscrew pasta per the package directions until al dente. Drain well and set aside.

Add pasta and all vegetables to the dressing and toss to combine. Marinate at room temperature for 30 minutes and season with salt and pepper to taste.

The economic calendar is relatively quiet with the biggest report of the week coming on Thursday when the Consumer Price Index will give us an update on February’s inflation readings. The previous reading showed headline inflation at 7.5% and core inflation, which strips out food and energy prices, at 6.0%. Expectations are for these figures to continue to rise to 7.9% and 6.4% respectively, which is extremely hot. This will likely get the attention of the Bond market.

Also on Thursday, the latest Jobless Claims data will be reported while Tuesday brings an update on how small businesses are feeling via the National Federation of Independent Business Small Business Optimism Index.

Investors will also be closely watching Wednesday’s 10-year Note and Thursday’s 30-year Bond auctions for the level of demand, while the uncertainty surrounding the ongoing war in Ukraine will likely add to volatility.