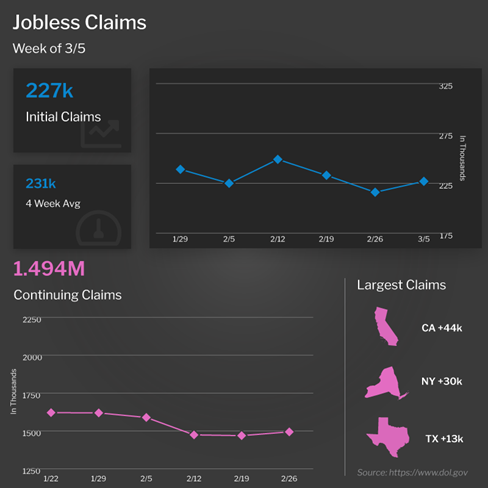 Consumer inflation is at the hottest level since 1982 while commodity prices are also on the rise.

Small business owners reported that inflation is the biggest problem right now, per the National Federation of Independent Business Small Business Optimism Index. Within the report, companies that expect higher selling prices rose 7 points to 68%, which is a fresh record high going back to 1974. Note that this report was for February, and this figure could rise even more.

Besides seeing small businesses report higher selling prices, the price of gas and other commodities like nickel, gold and copper are also rising – all of which can contribute to inflation. Rising inflation is important to monitor because it can have a big impact on Mortgage Bonds and home loan rates, which are tied to them. The Fed is expected to take action to address rising inflation at its meeting this week, and it is crucial to monitor what they do – and how the markets react.

So, what does all of this potentially mean for the housing market? Don’t miss our important explanations below.

Over in the labor sector, the number of people filing for unemployment benefits on both an initial and continuing basis moved higher in the latest week. However, claims are back at strong pre-pandemic levels. There are now 1.9 million people in total receiving benefits, which is a stark contrast to the 20.8 million people receiving benefits in the comparable week last year.

Lastly, investors were closely watching Wednesday’s 10-year Treasury Note auction and Thursday’s 30-year Bond auction to see the level of demand. Find out the results below.

The Consumer Price Index (CPI), which measures inflation on the consumer level, rose by 0.8% in February. This pushed the year over year reading higher from 7.5% to 7.9%, which is the hottest reading since 1982, when it was at 8.4%.

Core CPI, which strips out volatile food and energy prices, rose by 0.5%. As a result, year over year Core CPI increased from 6% to 6.4%. While these readings are red hot, they were in line with market estimates.

Within the report, rents rose 0.6% in February and increased from 3.8% to 4.2% on a year over year basis. While this data has started to increase, the CPI report is still not capturing the double digit increases year over year that many other rent reports are showing.

Owners’ equivalent rent increased 0.4% and the year over year figure rose from 4.1% to 4.3%. However, note that this data is based on a survey that asks homeowners, “If someone were to rent your home today, how much do you think it would rent for monthly, unfurnished and without utilities?” Understandably, this is very subjective and many people would be guessing these amounts.

Why is rising inflation significant?

Besides causing higher prices, inflation is the arch enemy of fixed investments like Mortgage Bonds because it erodes the buying power of a Bond’s fixed rate of return. If inflation is rising, investors demand a rate of return to combat the faster pace of erosion due to inflation, causing interest rates to rise.

The Fed is expected to address inflation at its two-day meeting Tuesday and Wednesday of this week, with expectations of a 25 basis point hike to the Fed Funds Rate.

Note that the Fed has two levers they can pull for tightening the economy – hiking their benchmark Fed Funds Rate and reducing their balance sheet. The Fed Funds Rate is the interest rate for overnight borrowing for banks and it is not the same as mortgage rates.

The bottom line is that we will want to closely watch how the Fed tries to walk the tightrope of hiking and allowing a balance sheet runoff during 2022.

February’s National Federation of Independent Business Small Business Optimism Index showed that small businesses grew less optimistic last month, as the index declined from 97.1 to 95.7. This is the lowest reading since January 2021.

Small business owners reported that inflation is the biggest problem right now. As a result, companies that expect higher selling prices rose 7 points to 68%, which is a fresh record high going back to 1974. Note that this report was for February, so these figures may worsen.

In addition, commodity prices are surging. In Europe, which gets the majority of their natural gas from Russia, the price is up 256% in the last 2 weeks. Imagine your heating bill going up 5 times or from $200 per month to $1,000.

Additionally, 70% of the world’s neon gas comes from Ukraine. Neon gas is an important factor in the production of semiconductors, which are already in a massive shortage. This can have implications for cars and other products that use chips and is something we will need to monitor in the months to come.

Other commodities, including nickel, gold and copper, are also on the rise and at historic levels. Many of the commodities that have risen are components of finished goods, which will cause inflation to continue to rise and be widespread.

What does this mean?

It is natural to expect a greater rate of return for obligating money for a longer period of time. Money that is committed to be lent for 10 years should normally offer a higher rate of return than money that would be committed for one or two years.

This increase in yield over time is known as the yield curve, which naturally moves up with maturity. But there is a phenomenon called an inverted yield curve, which has longer-term maturities yielding less than shorter-term maturities. This occurs when investors feel that prices in the future will decrease beneath present levels. When this goes inverted, it has been a very reliable recession indicator.

Again, the Fed is expected to hike their benchmark Fed Funds Rate at their meeting this week. This hike will push the short end of the yield curve higher, while the long end could move lower if it’s perceived that inflation is being reduced. This will cause an inversion at an even faster rate.

If we are to see a recession, how will it impact housing?

Why does housing usually perform well during these periods? Because interest rates typically decline sharply.

Initial Jobless Claims rose by 11,000 in the latest week, as 227,000 people filed for unemployment benefits for the first time. In addition, the previous week’s total was revised higher by 1,000 people.

Continuing Claims, which measure people who continue to receive benefits after their initial claim is filed, rose by 25,000 to 1.494 million.

Investors were closely watching Wednesday’s 10-year Treasury Note auction and Thursday’s 30-year Bond auction to see the level of demand. High demand, which is reflected in the purchasing of Bonds and Treasuries, can push prices higher and yields or rates lower.

Weak demand, on the other hand, can signal that investors think yields will continue to move higher, which can have a negative effect on rates.

The 10-Year Treasury Note auction was met with just below average demand. The yield of 1.92% was just a hair above the when issued pricing (lower is better). The bid to cover of 2.47 was just below the one-year average of 2.50. The percentage of direct and indirect bidders was about in line with the 6-month average. The auction did not have too much of an impact on the markets.

This Irish Tea Cake recipe courtesy of Allrecipes makes for a delicious treat on St. Patrick’s Day – or any day of the year.

Preheat oven to 350 degrees Fahrenheit. Grease and flour a 9-inch round pan.

In a medium bowl, cream together 1/2 cup softened butter and 1 cup sugar until light and fluffy. Beat in 2 eggs, one at a time, and mix until incorporated. Stir in 1 1/2 teaspoons vanilla extract.

In a small bowl, mix together 1 3/4 cups flour, 2 teaspoons baking powder and 1/2 teaspoon salt. Add the flour mixture to the butter mixture alternately with 1/2 cup milk. If the batter is too stiff, add 1-2 tablespoons of milk.

Add the batter to the prepared pan and bake for 30 to 35 minutes or until a toothpick inserted into the center comes out clean. Allow to cool in the pan on a wire rack, then turn out onto a serving plate.

Dust with confectioner’s sugar and enjoy!

A full week of economic reports are ahead covering a wide range of the economy.

On Tuesday, more inflation news will be reported when February’s Producer Price Index will give us a read on wholesale inflation for that month. We’ll also get an update on manufacturing for the New York region when March’s Empire State Index is reported.

Wednesday brings the latest on February Retail Sales and an update on how confident builders are feeling this month via the National Association of Home Builders Housing Market Index.

Perhaps the biggest news of the week will come Wednesday afternoon when the Fed’s two-day FOMC meeting concludes with its Monetary Policy Statement. Investors will be closely watching to see what action the Fed takes to address rising inflation.

Ending the week on Friday, look for Existing Home Sales data for February.

Mortgage Bonds have been in a clear downtrend, now trading just above an important floor of support at the 50% Fibonacci retracement level, which was tested throughout Friday’s trading session. So far, Bonds have bounced higher off this floor. Until this level is broken, there is reason to believe that prices can remain around current levels or rebound high.