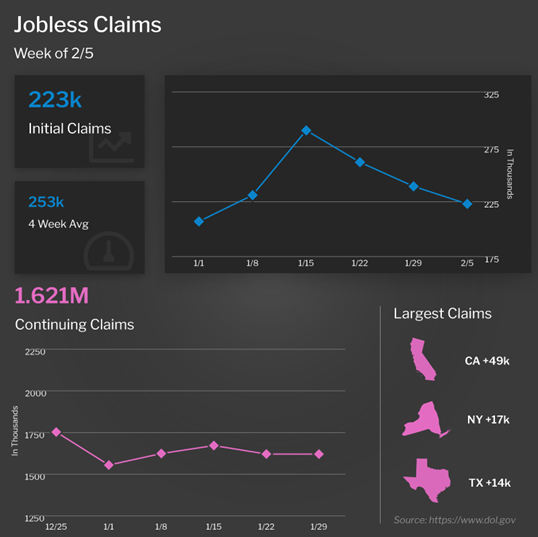 Consumer inflation reached a 40-year high and Fed members made headlines in response. Jobless Claims continue to move in the right direction.

The Consumer Price Index (CPI) showed that consumer inflation rose by 0.6% in January while the year over year reading rose from 7% to 7.5% – the hottest level since 1982! Core CPI, which strips out volatile food and energy prices, also came in above expectations with a 0.6% rise. As a result, year over year Core CPI jumped from 5.4% to 6%.

The National Federation of Independent Business released important data that speaks to how inflation is impacting small businesses. The Small Business Optimism Index fell to 97.1 in January, which is the weakest since February 2021. Within the report, plans for higher selling prices rose another 4 points to the highest level since 1974. Compensation costs rose another 2 points to 50, which is the highest since 1984 when the question was first asked. Both of these figures reflect the rise in inflation.

Fed members have also been sharing their opinions about how the Fed should address rising inflation, and their actions in the coming months will be critical to monitor because they will have a big impact on Mortgage Bonds and interest rates. Read more about this below.

After Omicron sparked a rise in unemployment claims in the early part of January, Initial Jobless Claims declined again in the latest week, as the number of first-time filers fell by 16,000 to 223,000. Continuing Claims, which measure people who continue to receive benefits after their initial claim is filed, were unchanged at 1.62 million. There are now 2.099 million people in total receiving benefits, which is a stark contrast to the 20 million people receiving benefits in the comparable week the previous year. Claims are at very strong pre-pandemic levels, showing that the labor market remains tight.

Lastly, investors were closely watching Wednesday’s 10-year Treasury Note auction and Thursday’s 30-year Bond auction to see the level of demand. Find out the results below.

The Consumer Price Index (CPI), which measures inflation on the consumer level, rose by 0.6% in January. This was hotter than expectations and pushed the year over year reading higher from 7% to 7.5% – the hottest level since 1982!

Note that annual inflation is calculated on a rolling 12-month basis, meaning that the total of the past 12 monthly inflation readings will give us the year over year rate of inflation. Each month, the most recent report replaces the oldest monthly reading.

Core CPI, which strips out volatile food and energy prices, also came in above expectations with a 0.6% rise. As a result, year over year Core CPI jumped from 5.4% to 6%.

Within the report, rents rose 0.5% in January and increased from 3.3% to 3.8% on a year over year basis. While this data has started to increase, the CPI report is still not capturing the double digit increases year over year that many other rent reports are showing.

Owners’ equivalent rent increased 0.4% and the year over year figure rose from 3.8% to 4.1%. However, note that this data is based on a survey that asks homeowners, “If someone were to rent your home today, how much do you think it would rent for monthly, unfurnished and without utilities?” Understandably, this is very subjective and many people would be guessing how much their home would rent for.

Remember, inflation is the arch enemy of fixed investments like Mortgage Bonds because it erodes the buying power of a Bond’s fixed rate of return. If inflation is rising, investors demand a rate of return to combat the faster pace of erosion due to inflation, causing interest rates to rise.

Rising inflation is a big reason why the Fed’s actions remain crucial to monitor in the months to come, as they will play an important role in the direction of the markets and mortgage rates this year.

Note that the Fed has two levers they can pull for tightening the economy – hiking their benchmark Fed Funds Rate and reducing their balance sheet. The Fed Funds Rate is the interest rate for overnight borrowing for banks and it is not the same as mortgage rates.

After the CPI report was released on Thursday, St. Louis Fed President Jim Bullard made some hawkish comments, saying that he wants to see 100bps of hikes by July 1, which would imply that we would need to see one 50bp hike and two 25bp hikes at the next three meetings.

Probably the biggest thing he said was that he thinks the Fed should be able to act and hike rates in between meetings. This was a new concept that shows just how serious he is about fighting inflation and removing accommodation.

It’s important to note that Bullard does make outlandish comments oftentimes and he is only one voting member. It does not mean that all the Fed members echo his thoughts. And on that note, we also heard from San Francisco Fed President Mary Daly last Thursday, and she said she is not on board with a 50bp hike and would rather see a 25bp hike. She is concerned with the Fed being too aggressive and thinks they need to move at a goldilocks pace.

Additionally, Richmond Fed President Tom Barkin said that while he is open to a 50bp hike, he does not think that the markets are screaming for one and would rather a 25bp hike. And we heard from Atlanta Fed President Raphael Bostic earlier in the week who said he supports a 25bp hike but that anything is on the table.

The bottom line is that we will want to closely watch how the Fed tries to walk the tightrope of hiking and allowing a balance sheet runoff during 2022.

The number of people filing for unemployment benefits for the first time fell by 16,000 in the latest week, with Initial Jobless Claims reported at 223,000. After the rise in jobless claims in the first part of January, which was likely due to the rise in Omicron cases, claims are now falling once again as Omicron cases are slowing down.

Continuing Claims, which measure people who continue to receive benefits after their initial claim is filed, were unchanged at 1.62 million.

Investors were closely watching Wednesday’s 10-year Treasury Note auction and Thursday’s 30-year Bond auction to see the level of demand. High demand, which is reflected in the purchasing of Bonds and Treasuries, can push prices higher and yields or rates lower.

Weak demand, on the other hand, can signal that investors think yields will continue to move higher, which can have a negative effect on rates.

The 10-Year Treasury Note auction was met with strong demand as traders took advantage of some of the highest yields in more than two years. The bid to cover of 2.68 was better than the one-year average of 2.47. Direct and indirect bidders took 92.6% of the auction compared to 83.1% in the previous 12. However, we did not have the positive reaction we would expect in yields.

Thursday’s 30-Year Bond auction was met with average demand. The bid to cover of 2.30 was just above the one-year average of 2.29. Direct and indirect bidders took 84.8% of the auction compared to 81.1% in the previous 12.

It’s probably no surprise that February is National Chocolate Lovers Month. This decadent recipe for chocolate ganache is a delicious treat for the chocolate lover in all of us.

First, add two ounces chopped hazelnuts (or your favorite nut) to a dry skillet in an even layer. Cook over medium heat, stirring and turning frequently until nuts are aromatic and golden brown. Transfer to a plate.

Next, pour 1 cup heavy cream into a saucepan and heat gently over medium. Add 8 ounces bittersweet chocolate chips into a bowl. When the cream has started to form bubbles around the edge of the saucepan (hot but not simmering or boiling), pour it over the chocolate and whisk until you have a smooth consistency and the cream and chocolate are incorporated.

Spoon generous amounts of ganache over your favorite vanilla bean ice cream, sprinkle with the toasted nuts and enjoy!

More inflation news is ahead when the latest Producer Price Index is released on Tuesday, which will give us a read on January wholesale inflation. Tuesday also brings an update on manufacturing for the New York region when February’s Empire State Index is reported.

On Wednesday, we’ll get an update on Retail Sales for January as well as how confident builders are feeling this month via the National Association of Home Builders Housing Market Index. The minutes from the Fed’s January meeting will also be released and those always have the potential to be market moving.

Ending the week on Friday, we’ll get an update on Existing Home Sales for January.

Mortgage Bonds fell sharply late last week and even broke beneath an important Fibonacci level of support at 99.984 on Friday. Things suddenly took a turn Friday afternoon as increased tensions between Ukraine and Russia sent oil prices spiking, which triggered a sell-off in stocks and Mortgage Bonds rallied on this flight to safety.

The 10-year is trading below 2% again after touching 2.05% Friday morning. Yields do have some room to improve to the downside if we can get some momentum until reaching 1.88%.